This tool will give you the ability to build the basics of verb conjugation for your own fictional language. Technically there's no limit to how detailed you can get. This tool is far easier to use this for regular verbs, but because you can change every aspect of the conjugation you can also use it for irregular verbs, it'll just require a little extra work depending on how irregular you want to get.

The tool works as follows:
First enter the verb you want to conjugate in the top input field, it'll automatically enter it in all the verb fields below it.
Now your own language probably doesn't have the words 'I, You, He/She/It, We and They', so in the next 9 fields you can change those to your own language and it'll automatically change these personal pronouns in all the pronoun fields below it.

Below that you will find multiple sets of 4 input fields. The first and third of each should be filled in with your personal pronouns and your verb. You can still change these if you wish, your grammar might have different pronouns for different tenses or maybe the verb itself changes.
The other two input fields are used to add the actual conjugation. For example, in the sentence 'I have been working', the first input field would have 'I', the second would have 'have been', the third would have 'work' and the last would have 'ing'.
Here's an image to illustrate how it works: 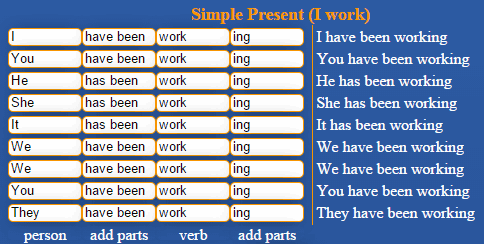 After you've filled in the input fields simply click the 'conjugate' button and it'll do the conjugating for you. This way you can make small changes more easily to see if it looks good and if it sounds good.

Remember: Add a space wherever it's needed. If you want something like 'has been' before the verb, write it as 'has been ', not 'has been'.

Separated personal pronouns and double 'we'

I've separated the personal pronouns he, she and it, some languages have different conjugations depending on gender. The same might be true for the other pronouns, like a female or male 'I', but I didn't want to go overboard.
I did add a second 'we', in some languages there's a we which includes the person you're speaking to and a we which doesn't include the person you're talking to.
Obviously you're free to change everything to whatever you wish. Your language, your rules.

I decided to add a section for every tense in the English language. This way it'll be easier for you to keep track of every tense for your own language. Each section works exactly the same as the other though, so you obviously won't have to stick to the suggested tense. But note that not every language has this many tenses, some have far less, some have more.

Enter the verb you wish to conjugate:


Remember to add spaces wherever you wish.

Present Progressive (I am working)

Simple Past (I worked)

Past Progressive (I was working)

Present Perfect Simple (I have worked)

Present Perfect Progressive (I have been working)

Past Perfect Simple (I had worked)

Past Perfect Progressive (I had been working)

Future Simple I - Will (I will work)

Future Simple I - Going To (I'm going to work)

Future Progressive I (I will be working)

Future Simple II (I will have worked)

Future Progressive II (I will have been working)

Conditional Simple I (I would work)

Conditional Progressive I (I would be working)

Conditional Simple II (I would have worked)

Conditional Progressive II (I would have been working)