Theseus and the minotaur

Theseus and the minotaur is a puzzle designed by Robert Abbott, the aim of which is to escape a maze before the minotaur can get you. However, you can only move one step at a time, while the minotaur will take two steps for every step you take. Furthermore, the minotaur will always try to move as close to the person in the maze as possible, but will first move horizontally, then vertically to find a path. This element is crucial in figuring out some of these puzzles.

As far as RPG settings go this one makes for a fun puzzle. The steps are easily translated into grids or even movement speeds, the minotaur can be replaced with any monster, and the maze doesn't even have to be a contained area. It could be a grim and dire looking monster following the party around the world, occasionally coming close enough to the party at which point they have to try and escape once more. The monster will eventually catch up with them again once they've moved in any direction that allows the monster to escape its locked position, but until that time the party is relatively safe. 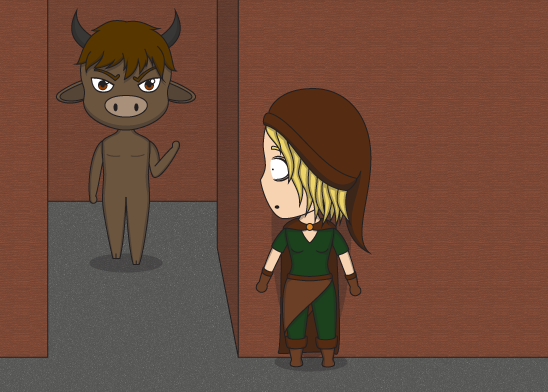