So in part one we've created our world in its rough form. We've settled what we want to be in what location, we know the climates and what kind of nature will grow in these areas, but we still have a whole lot more to cover.

Right now our world is generic and empty. If you were to explore this world in a game you wouldn't be very impressed and you wouldn't feel emerged at all. In this part of the guide we're going to change that. It's time to add life to our worlds and make our worlds feel like it has been lived in.

Unlike in part 1 I won't be using my example world to illustrate my points anymore. From here on it's all pretty straight forward and most information in this part and the next will be about possible features you can add to your world. I'll be sharing ideas and concepts which could apply to your world, but at the same time they might not be needed in yours at all. Either way, hopefully it'll give you some world building inspiration.

We've added plants, trees, mountains and rivers, but we haven't added any animals nor more advanced sentient species yet. While your world might not need intelligent life, you probably do need some forms of animal life in your world, both on land, in the air and underwater.

The thought process is the same as before when we were adding plants and trees: 'What kind of animals would live in this climate?'. The answer is pretty much whatever you want it to be, but within reason. If you want to keep things somewhat realistic you wouldn't have cold blooded animals live in a frozen tundra nor a woolly mammoth in a desert.

But besides making sure the animals who live in a region can actually survive there, you're pretty much left to your imagination in terms of adding wildlife. With a few adjustments you can make any animal live in whatever region you wish. You really want cold blooded animals in a cold region? No problem, add volcanic activity or hot springs around which these animals can live.

The creation of (new) animal species is covered in this guide, in which I go into more detail. But note that if you're creating a world for story purposes you likely won't need to go into too much detail anyway, unless a particular animal is important to the story. 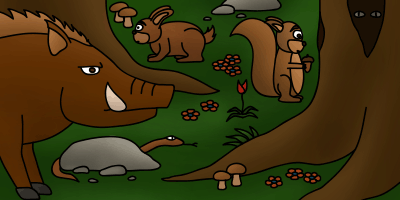 We've added wildlife, perhaps both sentient and non-sentient, but does this wildlife balance itself out? While a region full of predators might sound appealing, they all have to eat in order to survive. Sure, they could eat each other, but will they be able to sustain each other's population? Probably not, at least not unless they breed like rabbits.

In the whole process of building a world food chains aren't as big of a deal, at least if your world isn't meant to be seen on this level of detail. But adding at least partial food chains will make your world seem richer, more realistic and unique.

A big world changer is the addition of civilizations. Intelligent life who takes the world and molds it to their needs. Depending on how advanced your species are, you'll likely need to add towns, cities and other communities to your map. You will also need to add everything which is needed to support cities, like farms for food, mines for steel and power plants for electricity, as well as a few extras, like roads, harbors, borders, canals and more.

Adding intelligent life is done in a similar pattern as the way you add other animals, but with a slight twist. With intelligent life, especially the more advanced ones, you pretty much have full freedom to make them look like however you want. Thanks to their advancements they will likely have found ways to live in areas they would otherwise not be able to live in, just like humans did.

Part of this is covered in the society creation guide, which you can find right here.

Unless you're creating a world which is meant to be brand new your world will likely have elements which show some form of history. It can be something as simple as a watchtower which was destroyed in a terrible storm 50 years ago or it could be more elaborate, like ruins and remnants of an entirely different civilization. Perhaps there's a field littered with rusty swords and other remnants of a battle fought many decades ago.

These little pieces of history are not only great to make your world even richer, in terms of story purposes it also brings a lot to the table. Besides the obvious point of providing backstory, remnants of history can also be used in a more subtle way. That broken watchtower could now be the local kids' favorite playing ground. Those ancient ruins could provide a specific field of study which so far has yet to find any real answers as to how those ruins got there. 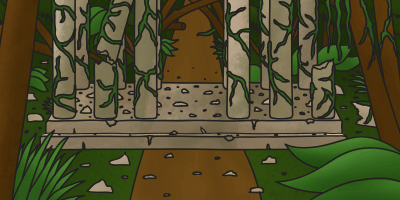 So far we've created a pretty unique world. We've added wildlife, perhaps even civilizations and history, but we can add a little more of uniqueness to this world, which comes in the form of daily life and ways of life, the lives of all types of animals.

Animals will hunt, eat, drink, sleep and breed in all sorts of ways. It's best to add some places where they can do so in relative peace. A bear den hidden in the hills perhaps or a tall cliff wall in which birds build their nests. A lake in a forest clearing where animals come to drink maybe, or fields of grass in which predators can stalk their prey.

The same goes for the more intelligent beings. Sure, we've added cities, roads and pretty much anything else related to it, but we can add a few more bits and pieces which show their daily life and their way of life.
It can be something as big as the way they handle their resources. Take what they can? Plan it all out? Replant trees? You name it. But it can also be something small, like caves hidden underwater or behind a waterfall which provide a place for secret meetings. Perhaps there's a special spot on top of a hill which provided a romantic view for young love.