This puzzle is another one of those you can adapt in so many different ways. While my version has a pillar, you could use pretty much anything in a room. The joys of a pillar, however, are that they're usually big, clunky, and can be accidentally knocked over, if they're fake anyway. Whether this is a good thing or not will depend on how you wish to use the following puzzle.

My character finds herself in a large room with 2 rows of pillars. With the exception of these pillars, the room is completely empty. The way out is hidden beneath a false pillar, one you can easily shove aside. But finding the right pillar could require a little creative thinking, because some might assume all pillars are as heavy and solid as the first one they might have tried. 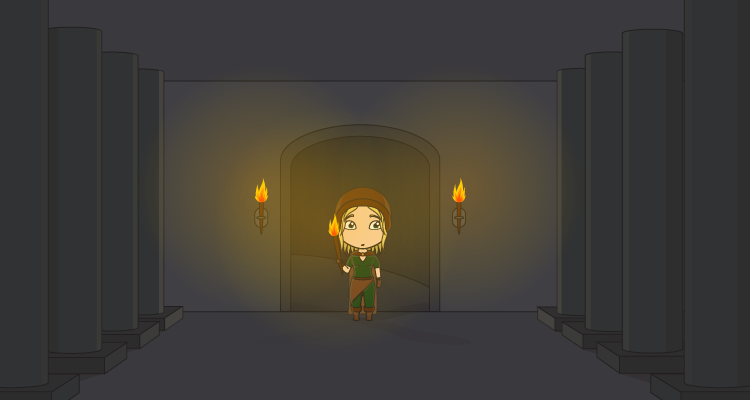 This basic version is, of course, just that: basic. There's a lot of elements you could add, and there are all sorts of ways you could implement this puzzle as well. The room might close after people have entered, then fill up with water, and only by moving the right pillar will the water be able to be drained.
Perhaps each pillar is holding up part of the ceiling, and removing one will cause that segment to collapse. Only the false pillar won't cause a collapse, and thus potentially show the safe way out.
Perhaps there are multiple false pillars, but only one will lead to the true path. Subtle hints might be carved onto that pillar, or perhaps previous adventurers have left some clues.

As I mentioned before, you can use all sorts of objects and elements. A wall with paintings of kings might seem inconspicuous enough, but one of those paintings could hide a treasure trove behind it. For bonus points you could hide it behind a king who may be illegitimate, a false king, wink wink nudge nudge.
To stick with subtle word plays, an exit hidden behind a fallen curtain could make for a clever way to end a dungeon too.

But to stay on the topic of other objects you could use, the possibilities are endless. Fake boulders, a fake oven in a kitchen, a stereotypical revolving bookshelf, or perhaps a suit of armor literally guarding an exit. There's more fun to be had than just hiding the exit though. The most obvious of which is hiding treasure in plain sight. Players will most likely not find any of them until one day it happens by accident, and then they'll look for it everywhere. But until that moment it could be a fun hidden mechanism. Consider them like little Easter eggs sprinkled around your campaign, Easter eggs that will likely never be found, but are there to amuse you anyway.

Another, possibly incredibly fun way to use these hidden exits is by having a non-player character (NPC) use these to always stay close to the players, but with the ability to appear and disappear out of nowhere using these exits, almost like Batman. Depending on the type of campaign you're running you could make this as humorous or serious as you wish. Perhaps one day the NPC gets stuck in the secret exit as a way of showing the players what's been going on this entire time. Perhaps the NPC only dares to use these exits when it's too dark to see them, or when the player characters aren't looking.

There are far more ways to use false pillars, or other false elements of course. From hiding objects to unleashing monsters, from silly jokes to paths that lead to optional side quests, and from sneaky traps to lore building story elements. The possibilities are endless, and because this puzzle, if you can even call it that in some of its forms, can be applied in so many different ways, it's not that difficult to keep things original down the line.