This is one of those fun puzzles that can be adapted in all sorts of ways. The puzzle will always center around the 4 seasons, but the way the puzzle plays out can be done in dozens upon dozens of different ways. The basic foundation of the puzzle is as follows though:
The player character comes across 4 paths, 3 (or all 4) of which are blocked in seasonal ways (ice for winter, etc.). In the middle of the room they find an orrery (or other, similar device), which they could use to activate a different door at a time. Whichever season is represented on the orrery will activate the corresponding seasonal door.

From here on you can make the puzzle as easy or complex as you need it to be. Perhaps pieces of the orrery have to be found first, perhaps part of the mechanism has to be fixed in one of the rooms before you can move to the next, or perhaps each room has to be entered in a specific order based on a story. There are plenty of ways to go about it. 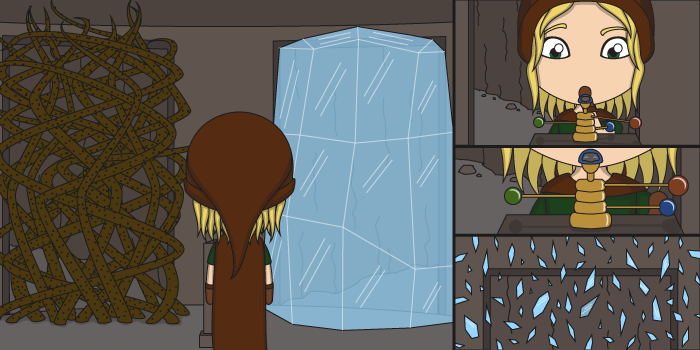 To give you some ideas or inspiration for ideas, here are some examples of how to change up different parts of the puzzle.

The orrery offers a lot of potential for puzzle and story elements. The individual planets part of the orrery could give the players a little insight into the world itself, assuming the elements are detailed of course. But these elements could be part of the puzzle as well. Perhaps figuring out which planet goes where is required, or perhaps the planets are scattered all over the dungeon. One planet might even be used as a fake eye in a statue or living creature.
The orrery itself may need fixing, perhaps pieces are missing or scattered around, or perhaps it just needs a little oil, oil you can only obtain from that big, slippery monster the party escaped earlier.

The mechanism doesn't have to be an orrery either. Perhaps it's a pedestal of sorts, and placing the right seasonal item (or spell) on top of it will activate the doors. Perhaps the entire room is a movable planetarium, which the players might only figure out once all lights are out, and the stars on the ceiling are able to shine.

The entire mechanism could also be like a giant clock, able to turn time back and forth, from spring to winter. This is something I've used, and toyed around with for a while in many different variations. It opens up another range of possibilities as well, especially if only the rooms (or room) themselves change with the time, not anything you may have taken out. Monsters could grow from little babies in spring, to hulking dire versions in winter.
An apple you take out of the summer room, could prove crucial in the winter room when a starving creature will grant you their favor in exchange for that apple. Like I said, tons of puzzle opportunities, and they can be very story driven too. You could even depict a history of something within the time changing rooms.

The rooms themselves, and the way they're blocked, could be played around with too. Instead of 4 rooms you could have a single room, similar to the time changing example from before. Instead of blocking each room with a mechanism tailored to that specific season, they could simply be blocked themed to whichever season is active. So in winter everything might be covered in ice, in spring everything's overgrown, in summer everything may be too hot, and in fall everything may be stormy, overgrown in thorn bushes, or something different. Each of these might also come with its own perils, perhaps in the form of seasonal monsters.

Each room can also be played around with thematically. Each room could tell a story for example, and supplement the story of the current campaign. Perhaps a festival is depicted in some way, or a different cultural element is present in each room. Perhaps different animals show up in different seasons, which might be a puzzle in and of itself as well. Feathers from birds in spring might be required to craft arrows with wood from autumn, and wool of sheep in summer might provide clothing for the cold in winter.

Each season brings its own hazards and safeties too. Winter may be cold, but with snow muffling sound, and with a lack of leaves and greenery, it's often easy to spot other living creatures. Spring life may be lush, bustling, and pleasant, it also comes with all sorts of potentially nasty insects.
Terrain's important in encounters, and in this puzzle each room offers a lot to play with. Spring lands can be marsh-like or overgrown with plants (difficult terrain), summer's sun can be blinding, autumn's storms can make bows and arrows useless, and the snow covered lands of winter can hide all sorts of pitfalls.

As mentioned, different seasons could have different monsters, but you could also simply have the same monsters with seasonal aesthetics. Ents would be an obvious one for example, but a zombie in spring might be covered in moss, in summer it might be dried to a husk, in autumn it might be tattered by the elements, and in winter it might be covered in icicles. They're small changes, but they help with getting the point of change across. If the zombies remained the same in each season you'd lose some of the atmosphere of this puzzle, no matter the form it comes in.

An idea I played around with, but ultimately didn't use in this form, is to have non-player characters age with the seasons, and they'd react differently to the players depending on their age. From curious kids in spring, to bitter or wise elders in winter. Each with a different story to tell, and each with different clues to give.
Should you push from winter into spring the cycle would either repeat or continue with new characters, which opens up even more possibilities.

The cycle of the seasons could be a constant, repeating cycle. If you go from winter to spring everything resets. The old become young again, what died is brought back to life, and so on. This can be a reset button that might be necessary for some puzzles. But the cycle could also simply continue with new life. Winter might turn to spring, but the creatures living in winter might die to make room for the next generation. If those alive at the moment know this, they'll probably try to stop others from changing the seasons. They might even wish to stop the seasons from continuing, and instead live eternally in summer as young beings at the prime of their lives. Of course, this may not be ideal for other beings, for a balance of nature, for a use of a magical source, or for any other reason, which is where the story develops, and the plot thickens.