Now that we've build our world, added life and given it enough uniqueness to make it feel authentic and unique, we're pretty much done. Well, almost anyway. There are a few more little details we can add, they're not necessary, but I do feel they need to be covered in this guide.

The world we've created so far is rich, it's easy to be immersed in and, above all, it feels realistic. But if we compare it to our world there are still some elements missing. I will cover those elements in this final part of the guide.

Just like most of part 2, most of part 3 is mostly a collection of ideas and concepts which can be applied to your world. Each world is different of course, so not all might apply to yours, but perhaps they'll help inspire the creation or enhancement of different parts of your world.

We've covered a whole lot about intelligent species, but I left out their interaction with each other (or themselves) and how that effects the world.

Bad relations between generally leads to some form of defensive and offensive measures. Outposts near the borders, perhaps an entire wall to keep everybody out, turrets or other battlements to defend against a potential attack, there are plenty of defensive measures which can be made, all of which tend to have a big impact on the landscape.

Offensive measures tend to destroy the landscape. Bombs, missiles, artillery attacks and other forms of offensive measures will generally leave their mark. It could be something as simple as large boulders which have been flung from a catapult or something as big as a crater impact from a large bomb. If you have a war going on, it's best to show it.

On the other hand, positive relations can lead to trade routes, the building of new cities or buildings, like embassies. It could mean both parties hunt together, build together and live together in bigger cities.
If two different cultures or even two different species intermingle, it'll often show through a clash of cultures within cities and settlements.

Sure, we've added a varied wildlife, we even added (basic) food chains, but there's more to wildlife than that. Wildlife changes, sometimes on purpose and sometimes by accident.
Some changes are temporary and as simple as a bear hibernating in winter, furred animals growing a winter fur and plants growing in spring. Other changes are permanent, like being born with a mutation (like albinos) or growing horns at a certain age and losing them at a later age.

Some mutations can be more drastic and from a story point of view this provides a plot point. From a game development point of view it provided both story elements and game mechanics, like elite creatures with better loot or rare versions of an animal which can be kept as mounts or pets.

Some animals migrate when winter comes or when its mating season. Parts of your world might seem empty when animals hibernate and migrate away, while other parts will burst with life because all those migrating animals travel to those region.

There's a lot to think about when adding wildlife to your world, but there are a lot of fun 'mechanics' which can make your world not just authentic, but also fun to be immersed in. 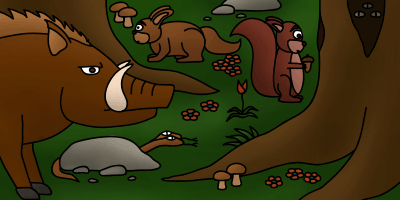 How many seasons does a region have? 2? 5? It's up to you. Will the seasons be fairly gentle or will they be like the monsoon season? Is spring a welcome change after a cruel winter or does spring seem more like a less cold version of winter?

Seasons are a great element to play around with, both from a story and world building point of view. It can change the way a region feels completely or make sure it always feels a certain way all year round.

Natural disasters happen, at least they do in our world and thus provide us with another element for our own fictional worlds. Natural disasters affect the world and not just by destroying it. Cities and towns will likely be build differently when build besides the fertile grounds of an active volcano instead of next to a quiet mountain. Homes in a hurricane region might be build stronger to withstand these forces or weaker and cheaper because there's no way to prevent destruction anyway.

Natural phenomena also have an affect on the world, although most of those affects can be applied to the more intelligent creatures. An eclipse might be seen as something divine and worshiped as such. A yearly comet trail might provide a nightly spectacle which is viewed and looked forward to be hundreds of thousands of people.

Obviously we don't have to stick to realism here. We could make a full moon have a bigger impact on the world, similar to its effect on werewolves. Perhaps a fantasy version of the aurora Borealis has an affect on the mood of all those below it.
Let your imagination go wild.

Sometimes creating an interesting world means breaking the rules, or at least the laws of physics as they are in our world. Floating islands, enormous 'world' trees, a moon too close to the planet but otherwise stunning to look at, enormous and gorgeous waterfalls without a big enough source, gigantic animals and many other elements can make a world stunning and interesting.

Whether you want to add these types of elements to your world will depend a lot on the purpose of your world. It won't work well in a fantasy setting which is heavily based on our world, but it could work perfectly for an alien planet or a magical world.

At the same time it's best to make sure these elements fit within your world just like we've made other elements fit in our worlds in the previous two parts of our guide. You won't have to be as strict, but it will help make those elements come across more realistic, even if they aren't. 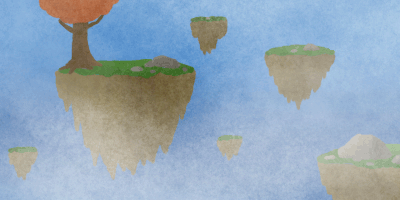 It's a big task to create a whole world, but I hope this guide has helped you with creating your own. I've covered and suggested a lot, but everything I've covered isn't meant to be taken as strict guidelines. Worlds are huge and varied, even more so in fantasy, so let your imagination go wild and create a world that feels right to you, it's your world after all.