In part one we covered some of the essentials of a religion. In this part we're going to add more details, mainly aimed at the followers and the way they follow your religion.

Some details won't matter all that much in the big picture, like what kind of symbols you use, but the point of details is to enhance and enrich your religion in order to make it more authentic and realistic. You wouldn't design an entire house without adding furniture or even doors and windows, so why design a religion without adding some finer touches.

Also note that from here on not everything is meant to be taken too strictly. A lot of what I'll mention are merely suggestions, ideas to get you thinking and hopefully inspired a little.
The impact each detail will have depends a lot on what the purpose of your religion will be. For a novel some details might not be needed, but for a game universe those very same details might be worth adding to help cultivate your world.

Special figures, like religious leaders, chosen ones, prophets and even sons and daughters of gods can change the world significantly. Followers will look to them for guidance, for help in times of need and for advice on difficult issues.
Whether you pick a religious leader, a chosen one or a child of a god won't change much in terms of their position in society, they will generally all be seen as a leader, but it does change the dynamics around it.

A religious leader would have to be chosen by other important religious figures, similar to how the pope is elected. The integrity of this position and of this figure could be questioned easily.
A chosen one would be hand picked by a god, so there won't be any reason to question if that person is supposed to be in a position of leadership, but there could be questions regarding whether or not that person is fit to lead.
Children of gods will clearly have a strong position, but do they live up to their parents and are they themselves even fit to be a god. What if the child is a child between a god and a human? Like Hercules.

Other details you could add to spice things up is how a religious leader or a chosen one is actually chosen. Is it the first born child after the death of the previous leader? Is it whoever is born with a special body marking? Does the god point somebody out in a crowd? What if the gods themselves don't really care?

Like most details so far, this is another which will depend heavily on what the purpose of your religion is and what you need from it for your story. A prophet could be a great hero, but if you already have several heroes in mind you may not want to add a prophet, and so on. 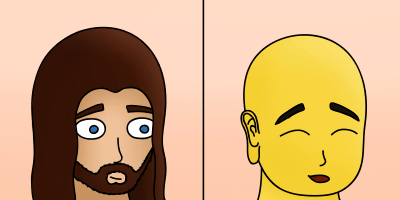 Many religions have sacred places, they could be places of worship, like temples, or they could be far greater than that, like a spiritual world tree, a holy city or a sacred mountain.
Places of worship offer followers a place of comfort in desperate times and a place of celebration during pleasant times. These places might also be the location of special celebrations, like holidays and weddings, but also the location of memorials and burials.

If you have a particularly important and unique sacred location it's generally best to add some history to it. Why is that place so special? Did the gods fight a battle here? Was it the location of the first contact between god and men? Is it the center of divine powers?
These details are less important for smaller and more common places of worship, but they could still be of importance to the story. Maybe those places of worship are important to the gods, maybe they hold some divine power or historical value. The more detailed your religion the more authentic it will likely be, as long as you add great details anyway.

Traditions and rituals don't have to be a positive experience either. Depending on your religion there might be sacrifices, religious forms of punishment or other negative experiences.

Traditions and rituals also offer great elements for stories, but deciding what kind of rituals you want may also depend on what your story needs. It can be a tricky balance, but fortunately there are hundreds, if not thousands of traditions and rituals all across the world and throughout history from which you can take inspiration.

Many religions have some form of dress code. Some have it for all followers, some only for leaders or specific followers, either way it provides a great way to make your religion more unique and it can reflect how strict your religion might be.
Whatever dress code you decide to use, it's best to add some background information as to why followers have to wear it. You could make all followers dress in gorgeous outfits, but if there's no real reason why they're dressed that way it could come across as odd to say the least.

There's plenty of inspiration you can take from the real world for this detail as well. The clerical collar of Catholic priests, the Dastaar (turban) of the Sikhs, the Burka, Hijab and Niqab of Muslim women, the Kasaya (robes) of Buddhist monks and the Kippah of the Jews are just a few of the obvious examples you can take inspiration from, but there are far more, often less obvious examples in the real world (and fictional worlds) which could help you make your religion more unique. 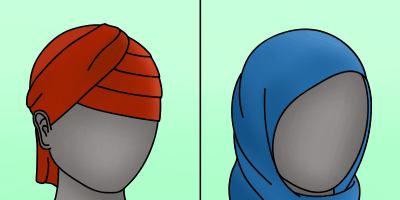 Many religions have at least one symbol with a significant meaning, but most have an abundance of them. The Christian Cross, the Star of David, the star and crescent, the Yin Yang symbol, the Wheel of Dharma, the Swastika, the Eye of Buddha and the Torri Gate are just a few examples of symbols which are generally seen as the main symbol of their respective religions.

Picking a symbol for your own religion can be tricky, especially if you don't have a significant event or object tied to your religion which could be used as a symbol, like the Christian cross for example. However, it'll become easier to pick a symbol once you write down what your religion stands for. Life? Love? Unity? Death? Whatever it is, and it can be a combination of many things, once you've figured it out you'll be able to pick a symbol more easily.

Let's say your religion celebrates life and death, the symbol could be a mix of water (life) and fire (death), or the sun and the moon (day/night as life/death), or two hands shaking each other, one alive and the other a skeleton.
You can be as imaginative as you want, it's your religion after all. If you're really stuck for inspiration, try searching the internet for symbols related to whatever it is your religion stands for. Google images is usually a good place to start.