Between the folds puzzle

Folding puzzles are most likely something you've come across before, whether in person or in a work of fiction, but they can still make for great little 'hidden in plain sight' kind of puzzles. There's many different ways to go about it too, and creating them, even some of the more complex ones, is usually simple enough.

My character finds herself lost in a forest with a map. The map doesn't seem to be correct, but she was assured it was by an admittedly odd person. She doesn't remember ever coming across a giant lake nor across the big water-pass on the top side of the map however. She soon realises those parts are fake, and, by folding the map inward, two points of the map can meet up and form a smaller, more familiar map. 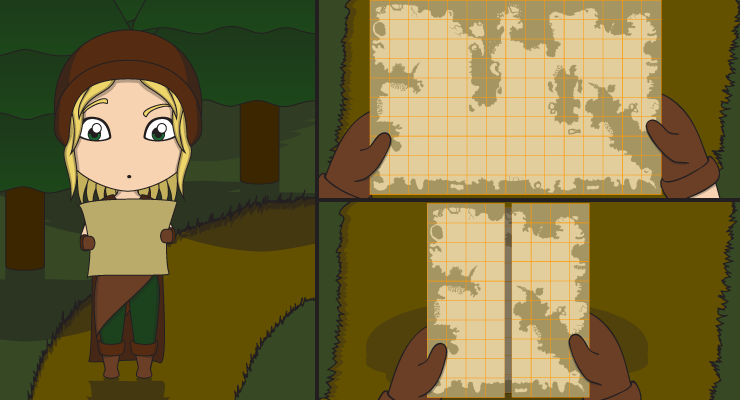 Creating a basic version is very easy. You simply need to draw an actual map, then cut it in half, spread it out, and then fill in the blanks in the center to make it look like a new, bigger map. Alternatively, my map creator could be of help, at the very least you'll know the pieces will line up perfectly (assuming you pick the right pieces) once the map is folded.

You'll need to give the group some hints however, which could be in the form of familiarity with the terrain, it could be in the form of symbols on the map, which only make sense when the map is folded, or you could even pre-fold the map to mimic the use of the map by a previous user, so the party might try and copy those folds.
Creating symbols or even text that lines up only when folded isn't too difficult either, it's basically the same principle as creating the map. I've created some examples in the illustration below. Note that depending on how obvious you want it to be, you'll want to prevent straight edges on the cut symbols, like the straight edges in the bottom example, and go for rounded or other oddly shaped edges, like in the top two examples. 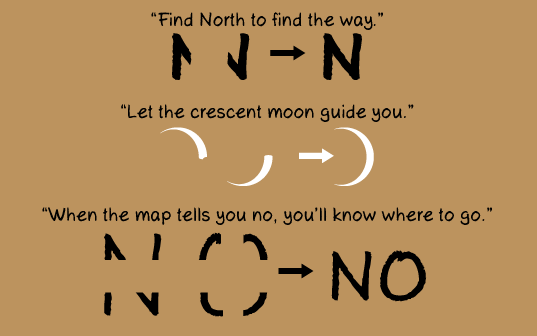 So it's mostly just a matter of cutting letters or symbols in halves or quarters. You can do more elaborate ones too, but I advice you to first fold a piece of paper the way you want the party to fold it, then look at the folding lines, copy those over in any image editing program, and use those lines to place the symbols along. That way you know the folds will work.
For the "no" example in the image above, to get them to all align you need to first fold the map like my character did in the first image to make the sides of the symbols meet up, and then do the same on a horizontal line for the bottom parts of the symbols. This can get a little fidgety though, as the more folds you need to make, the thicker and clunkier the result gets.

Obviously you don't have to use maps for this. You could hide symbols on simple notes, even on paper money. It'd make for a sneaky way to show allegiance to some secret order, for example. Perhaps a rune of sorts is hidden in pieces, and unfolding it, so to speak, will teach you a new spell, or worse, it might cast a spell.
There's a whole lot of sneaky creativity to play around with, you could even add symbols just as a little bonus without mentioning much about it, unless the characters specifically look into those symbols of course. Consider it an Easter egg of sorts. Either way, have fun with it.