Creating 'realistic' weapons and armor for a realistic setting is tricky in and of its own, but doing so for a fictional setting can pose its own challenges along the way, especially if you want to stick to at least some form of realism.

In this guide I'll go over steps you may want to follow or take into account when creating a fictional set of armor, or an awesome new type of weapon. Of course, this is merely a guide with guidelines, anything goes when it comes to fiction. But some things are generally received better by audiences than others, and this is what I'll try to help you with.

The first thing to keep in mind when creating a set of armor or a weapon is what kind of technology the people wielding and creating your armor and weapons have access to. This may seem like an obvious step, but it's something that is often forgotten or otherwise not paid attention to in plenty of works of fiction.
Early medieval knights not having access to automatic rifles is obvious, but what kind of bows and crossbows would these knights have access to? If you're going for realism this is worth researching.

But once you've figured out what the standard for the period of time your story is set in or is reflecting was, you can of course bend the rules a little. Did they only have access to iron? Well, finding a special kind of stronger iron is not too far of a stretch in a fictional universe.

A common theme in many fictional stories is relic weapons and armor. They've often been forged under special circumstances, were used by mighty heroes, and were somehow lost in time only to be found again when the new heroes needs to defeat a new powerful enemy.
If you're going for such a piece of equipment, you may wish to consider the technology available at the time of creation as well. Some almighty crossbow won't make too much sense if it's the only crossbow used during that time and ever since. Why would that be the only crossbow? Even if this one is specially forged, surely they'd be able to craft more generic versions too.

The basic point is to make sure your relics aren't too special and unique, or at least have a good way of explaining why they can't be reproduced at a later time. Sure, that one sword may have been crafted by deep mountain dwarves with special forges, and they may have been killed after the creation by some evil force. But if the sword was lost for 1000 years, it'd make sense if similar swords were crafted since, even if they weren't crafted with the exact same method. 1000 years is a long time for sword crafting to improve drastically.

When creating a weapon or a set of armor, it's important to keep the person who's supposed to wield it in mind. Dragonscale armor may look impressive, but it's going to be pointless on a ninja who's supposed to be nimble, quiet, and stealthy, or on a scrawny person who may succumb under the sheer weight of it.

The same goes for dual wielding weapons. Some are too heavy or too clumsy to be dual wielded. Shooting with 2 assault rifles might look cool, but if you're going for realism, and for somebody who's trying to hit a target, it's best to allow this character to hold that assault rifle properly.
Things get even more crazy when your character is wielding 2 crossbows or older guns. Good luck reloading after you've shot your 2 pre-loaded bolts/shots.

But there's more to keeping the wielder in mind than that. Realistically a regular person could wield a sword, spear, axe, mace, and all sorts of other weapons. But the fighting style of this character also comes into play. A nimble and agile fighter probably isn't going to be fighting well with a giant mace, no matter how awesome it may look.
Your character may be great at fighting with a sword and shield, but picking up a two-handed sword requires different training and different skills.

So you've taken into account the available technologies, and the skills of both the crafter and the wielder. Time to create that incredible laser gun that doubles as a grenade launcher, a grappling hook, a sniper rifle, and a toothpick, right? Not exactly.

Creating very complex weapons often means the overall weapon is less efficient than a weapon dedicated to a specific task. Adding a grenade launcher adds weight and changes the balance, adding the ability to be a sniper rifle comes with restrictions on both the sniper's ability (often less range), and the regular laser gun ability. Not to mention the added skills required to use all these added extras, with the exception of the toothpick of course.

If you can avoid making your weapon more complex, it's often better to do so. Perhaps give a different character a different weapon dedicated to a different task, or simply let the main character carry regular grenades instead.
Of course this isn't too much of an issue in more fantasy or futuristic heavy settings in which rules can be bend and broken more strongly, but some form of realism is often still required. 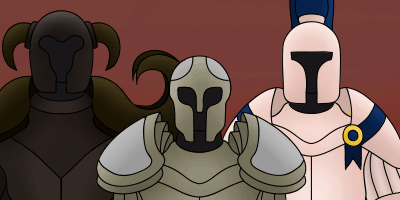 Consistency and balance are 2 important elements to keep in mind. If you have swords made from a specific kind of metal great at piercing armor, it'd only make sense arrow heads, bolts, axes, and all sorts of other weaponry could also be made from this metal. This may seem like a minor issue, but this means this army has access to platoons of archers with special armor piercing arrows, and this heavily turns the battle into their favor.

This brings me to balance. Weaponry and armor, or attack and defense, always seem to be fighting for dominance over the other, and in doing so balance each other out slightly. If the enemy discovers a new kind of weapon, you will try to find a new kind of defense against that weapon. If the enemy has a new kind of defense, you'll try to find a weapon that can pierce this defense.
That doesn't mean one can't completely outweigh the other at times. Nuclear bombs are a good example of this.

But balance goes further than just trying to outdo your opponent, balance also applies to the costs of using incredibly strong weapons and armor.
Powerful pieces with special enchantments or abilities far beyond those of ordinary equipment of that time can quickly become overpowered, but one way to keep some form of balance is by adding costs to the wielder. Perhaps this piece is evil in some form, and slowly alters the wielder's mind, or maybe a sacrifice has to be made to even be able to equip it.

Ammo, scabbards, and other extras

Something that is often forgotten is that many weapons, and plenty of armor pieces come with a whole lot of extras you have to carry or otherwise keep in mind. Some are movement restricting, some are simply adding weight, and some can mean the end of you if you don't have this specific piece.

Ammo's a big one, and its realism is often discarded for the sake of the cool factor, but if you want to be realistic, it's wise to do some research. Did you fire 5 or 6 bullets?
To illustrate realism versus cool factor even more, consider the following: Where would you have your arrow quiver or sword scabbard, on your back or on your waist? If you answered your back, and you're going for realism, try putting your sword back into your scabbard or grabbing an arrow, counting them, or bowing forward to greet a superior, or to duck underneath something. Now pick up all your arrows from the ground, because they will have fallen out.

Laws of your universe

Another aspect you may wish to keep in mind, especially for more modern settings, is whether certain weapons are considered legal or not. Some weapons cannot be bought or created through legal means, which means the good side generally doesn't have access to them under normal circumstances.
On the other hand, the bad side may have access to all sorts of illegal weapons through black markets and other methods.

I've mentioned doing research a few times in this guide so far, but it really is important to do your research if you're going for realism. How certain weapons work, what materials they're usually made from, durability, strength, predecessors, and future developments, all this helps enormously with creating your own weapons. Even if you're not going for realism, the research you do can help form the basis for all sorts of fantasy weapons and armor. A good foundation goes a long way.

Tools on this site

I've created an armor creator and a weapon creator which may be helpful for you. Right now they're more medieval fantasy oriented, but in the future I'll add a wider range to both. If nothing else, they may at least provide you with some inspiration.