Writing a speech, whether for a real life event or a fictional character, can be very tricky to pull off well. It can often seem like confidence is the main ingredient, as long as your character is confident, perhaps even a bit of a bad ass, the speech will sound great, right? Wrong.

While confidence is usually key, it's not the one key, but merely a key part of many different aspects that make a speech great and persuasive or bland and forgettable. In this guide I will go over the biggest aspects of writing a great speech, but I will be focusing on fictional speeches you'd write for a story, rather than speeches you'd write to use in real life. The process for both is quite similar and some aspects will be helpful even if you're looking for help with the latter, but for the purpose of this guide it's easier to focus on one type rather than both.

I've covered a small part on speeches in the dialogue writing guide and those points will be repeated here, but this guide is far more in depth than the short snippet in the dialogue guide. However, the dialogue guide may still be helpful to you if you're struggling with speeches, word choice and dialogue in general, so feel free to check it out.

The purpose of a speech is, in most cases, to convince other people of something. This can be something good, like convincing an army they will be victorious and thus raise their morale, or it can be something evil, like convincing the citizens of a town they're suffering from a fake disease and the only way to cure it is with your 'medicine'.
Other purposes of speeches are usually related to ceremonies, like a wedding, funeral or birthday. These tend to be more focused on simply saying something nice, not on convincing people of something. These types of speeches aren't what we'll cover in this guide, they fall more under regular dialogue in my opinion.

Once you've found a good purpose it becomes a whole lot easier to write a speech. You now have a goal, a mission to convince your other characters of something and thus a way of hopping back and forth between the audience and speaker to see whether your speech would be effective in that scenario. Would your army respond to the words of their leader? Would those villagers fall for the honey coated words of the medicine salesman or are they too smart for that? If the answer is no and you need it to be yes (or vice versa) you know you have to change your speech.

Whenever you write (or give) a speech you'll want to make sure you always stay focused on the single message you wish to convey. Make your points and move on. Don't delve too far into details, ramble on or worse, let your character get sidetracked by talking about something unrelated.
The longer a speech drags on the more likely it is you'll lose the attention of your audience and thus the less likely you'll convince them of your message.

On the other hand, you can purposely use these elements to make sure your character doesn't manage to convince their audience. There are plenty of times when a character may have to fail at convincing an audience, one way of doing so is by just making the audience completely unresponsive to every word that is spoken, but another and often better way is to make the speech and/or speaker flawed.

Another big aspect of a speech is how it is build up. A very effective way is by making sure it has an introduction, a middle (or body) and an end, much like most stories. In a speech each part is equally important, when one part fails the others might fall with it, so it's good to know what to put in each part.

The introduction is obviously meant to grab the attention of your audience. You want to make sure what your character says will have every audience member pay attention to that character and intrigued to hear what else that character has to say.
This is usually done by making a big statement, one that is meant to show the audience you know a way of changing their circumstances, whatever they may be.

The middle of your speech is meant to point out how your intro statement is true, which you do by making a few strong points to support your case. In the case of an army it could be pointing out (or reminding them) who they are, what they're fighting for and that it is the enemy that should fear them. In the case of the shady 'medicine' salesman it could be pointing out how bad the lives of the villages are or will be without this special cure.
Sometimes this means you have to lie or otherwise bend the truth to make your point, this is where it can get tricky as it means your points are flawed and you have to make sure your audience doesn't spot these flaws.

To hide these flaws it's best to make sure you use your strongest point first, this helps build confidence and trust after the big intro statement. After that you follow with your weakest point and after that with your final point. This way the audience will likely forget about the flaws in your weakest point and instead stay focused on your message.
Of course, since you're writing fiction you can make your audience react however you wish and your points as strong and valid as needed, but sometimes realism gets in the way of this.

Finally you end with a conclusion. This can be done in various ways, like summing up the points you've made or repeating your opening statement. Repetition is often used in many works of fiction and is very powerful, but don't feel like you have to use this method. There are plenty of great speech examples which did not rely on this.

If you still feel like you're struggling with the build up, try looking at some video clips of what people consider great (or the greatest) speeches from movies, if nothing else it might give you some extra inspiration for your own speech. 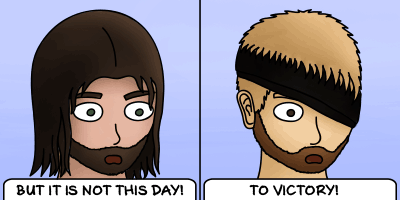 I've mentioned 'convincing' a lot already, but how exactly do you convince an audience of something? By using persuasion. There are generally 3 ways of being persuasive, which are by either using credibility, emotion or logic.

Credibility is often a strong persuasive argument as it means something or someone has proven itself before, so the same could happen again. Credibility can come in the form of having proven warriors or politicians back you up, having evidence of your invention's actions or even using a higher power, to name just a few examples.
A higher power is often a very strong argument in terms of credibility. As long as those you're speaking to are strong believers surely they can't deny the words of their own god(s). Of course, many religious texts could be interpreted differently, which could aid your character's speech.

Emotion can be a strong persuasion method, but it's often very situational. If the audience isn't already in a state of strong emotions, whether fear, anger or other, using an emotional argument will either be ineffective or it'll require a persuasive and often charismatic person to pull of.
So trying to write a speech with emotional arguments will rely heavily on your character, but emotional speeches do often make for great reading. Of course, people do generally always feel something, so emotions are often always part of speeches in way or another.

Lastly there's logic and you can't argue with logic, most of the time anyway. Logic is one of those arguments in which the truth can be warped a lot to make sure the logic remains, well, logical. Logical arguments can also be difficult to pull of. For example, an army with virtually no chances to survive could either choose to fight and most likely die now or return home, see their loved ones a final time, live perhaps a few more days and then die at the hands of their enemies. Logically the second option would be more favorable. But you can bend this truth a little to make it seem more logical to fight, for example: Fight now and show the enemies who we are. Fight now and make them remember it. Fight now and give them everything you have, for every minute you stand and fight is another minute your family, your loved ones, have to live and make their way to safety.
Now all you need your leader to do is send a handful of riders to warn those families and get them to safety and you've now turned a group of terrified, hopeless fighters into a determined army.

One of the most important aspects of making a speech great and convincing to its audience is to use inclusive terms, like 'we', 'us' and 'together'. You shouldn't say "You're the children of light and you shall never fear darkness.", the far more powerful version is "We're the children of light and we shall never fear darkness.".
Even when the person giving the speech isn't going to be part of whatever its audience is going to do it's better to use inclusive terms. It adds confidence, togetherness and just overall power to the words that are spoken.

Using inclusive terms is something used pretty much daily by leaders all around the world. A famous and powerful speech example is what Nelson Mandela once said: '... My Fellow South Africans: Today we are entering a new era for our country and its people. Today we celebrate not the victory of a party, but a victory for all the people of South Africa."

Pauses are important as well, not just for the sake of the speech in terms of how it is delivered, but also in terms of how you write it. A pause at the end of a strong statement will help sink it into the minds of your audience, it'll make them think about it. It's also terrible to have to listen to somebody who just keeps rambling on and on, no matter how great the message is. People speak with pauses, a speech should be no different.
Now this rambling on and on effect can also become apparent in your writing. If you have a long speech you'll want to break it up once in a while. Write about how the people in the audience are reacting, maybe about what the speaker is thinking and so on. This way you can create numerous pauses in your speech without having to actually write the word 'pause' once.

There's not a whole lot more to it than what I've mentioned, so try not to overthink it. Write what you feel would convince you if you were in the position of your character's audience. After that you can spice it up here and there to make it sound great, but it's best to first get the convincing part out of the way and then make it sound good, rather than the other way around.

Speeches may seem like a big deal because they have a huge impact on both its audience and the reader, at least if done well, but it's still all dialogue spoken by characters you know well, in most cased you created them.

Lastly, if you're really struggling for inspiration or any other aspect, read and/or watch some of the greatest speeches given by people in real life and in movies. You'll find many of them aren't as complex as you might perceive them to be.